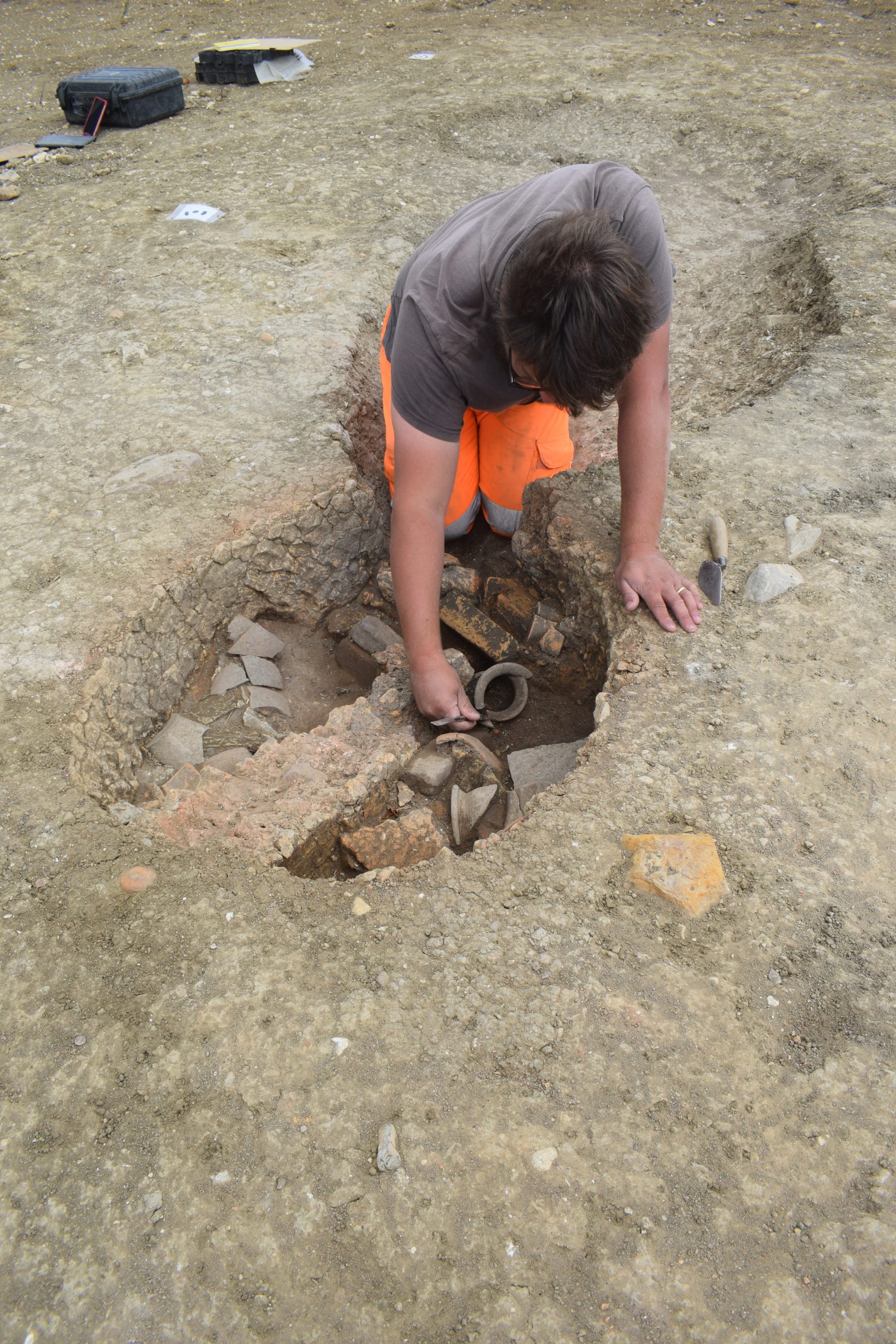 The fascinating Roman past of the new community being built at Wintringham features in the next episode of Digging for Britain, which will air on Sunday 22nd January. The discovery by Oxford Archaeology of a series of decapitated bodies with the heads transposed by their feet captured the attention of well-known academic Prof. Alice Roberts, who brought her filming crew to the site near St Neots, Cambridgeshire.

Master developer Urban&Civic has been developing a new community at Wintringham since 2018. Ahead of construction work, Oxford Archaeology (OA) was commissioned to assess and excavate the area to help bring its past to light. Over the years, archaeologists uncovered evidence of Iron Age and Roman settlements, starting around 2500 years ago and lasting into the late Roman period (fourth century AD).

During the 2021-22 excavations, archaeologists from OA’s Cambridge office uncovered a busy Iron Age landscape composed of 40 roundhouses and a network of trackways and enclosures related to farming activities. In the Roman period, the village evolved into a well-planned settlement that yielded some outstanding finds.  Coins, brooches, a large lead lid or platter, and numerous pottery vessels, are all objects that help bring to life Wintringham’s ancient inhabitants. A Roman pottery kiln and a large number of quern and millstones, used to grind grains, show that there was a very high level of craft and industry at the site.

The discovery that brought BBC2’s Digging for Britain to Wintringham was the burials of decapitated bodies dating back to the third century AD,  the heads  positioned by the feet. Decapitation is not unusual in Roman burial contexts and does not necessarily indicate that these people were executed or encountered a violent death. What makes the Wintringham site unusual is the high number of burials of this kind, 11 out of the 17 Roman burials, which would suggest that this funerary custom could have been a local tradition. The individuals were clearly treated with care, as they were interred carefully and often buried with pottery vessel grave goods and in one case, a pottery vessel was found in place of the head. 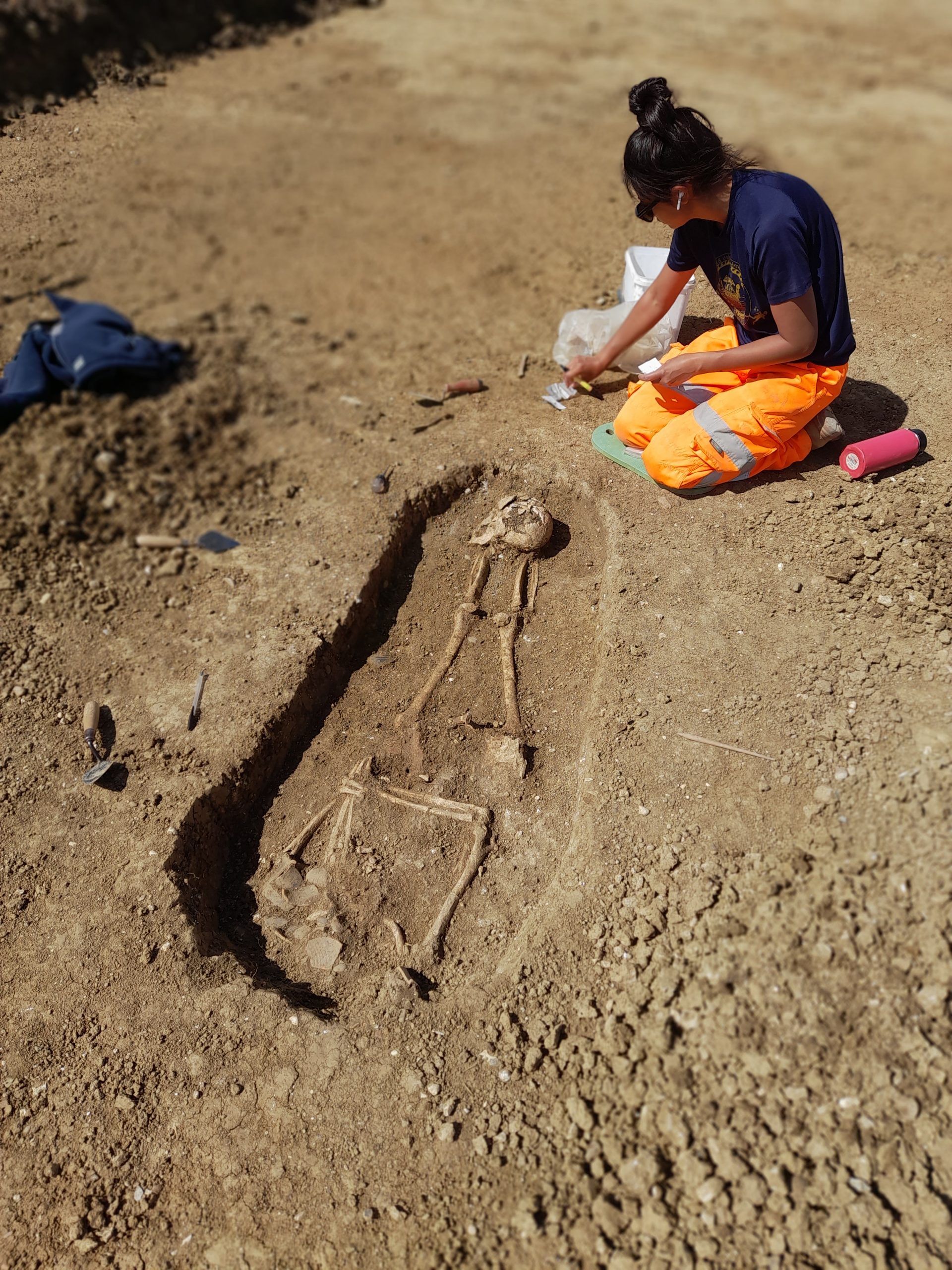 The burials were excavated by professional archaeologists with the utmost care and respect and in accordance with the conditions of a licence issued by the Ministry of Justice. As the Digging for Britain episode airs, Oxford Archaeology’s osteoarchaeology specialists will start analysing the skeletons following national best practice guidelines. This will hopefully provide more details about the burial rites that were in use at Wintringham and provide answers to the many questions raised by these unusual burials.

Patrick Moan, Oxford Archaeology’s Project Manager, said: “Having the opportunity to work with Urban&Civic over the past half a decade at Wintringham has been excellent. They have worked with us to enable this opportunity, which has revealed amazing insights into the people who lived in the area thousands of years ago. These results add greatly to our understanding of the local landscape’s history which we can now share with local communities, and nationally through our work with Digging For Britain.”

Rebecca Britton, Regional Director for Urban&Civic, said: “The power of archaeology – particularly with the places coming forward as new communities – is it shows us the history, people, places and customs that came before us. It is amazing to think of the lives and industry that went on at Wintringham through the centuries and to find out more about the customs of the times.

“The Oxford Archaeology team has been amazing at bringing their finds to life so far through heritage events with the new community and neighbours across St Neots, and we can’t wait for people to watch the episode. We will continue to work with the team to make sure the finds and their stories are told within the new development and to future residents in the next phase of the development.”

Episode 3 of Digging for Britain, titled “Headless Romans and Anglo-Saxon gold”, will air on Sunday 22nd January at 8 pm on BBC2 and is available on iPlayer now.